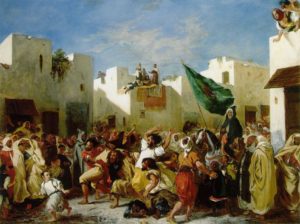 Eugene Delacroix’s “Fanatics of Tangier”
Public Domain due to age.

Yesterday, my son and I went to a soccer match to watch our favorite MLS team. It has been a while since we have been to a match, but we quickly got back in to the routine of cheering for our team. As we sat there, though, listening to the others sitting around us, I could not help but wonder if they were fans or critics.

When you go to a sporting event, whether it is a professional team or a children’s recreational game, there are always people watching with passion. At yesterday’s match, there were those with painted faces, dyed hair, and mascot-like costuming that really added to the atmosphere.

Though you do not have the painted faces and costuming at a child’s recreational game, you have similar passion from parents and family members, cheering on their young players. Unfortunately, just as we see at professional events, parents sometimes cheering a little too much, a little too loud, and a little too critically.

A Society of Critics

It has almost become common place that we criticize the things we supposedly enjoy most. During yesterday’s match, those same fanatics who were painted and costumed were also demeaning, negative, and just plain nasty toward our own team. Our own players. In fact, some were so negative that it was difficult to determine if they were even enjoying the match.

We have become so critical in our culture. We expect perfection, yet we have very little appreciation as to what it takes to perform the skill or action needed to begin with. Now I am sure that many of you reading this blog are not soccer fans, but when you watch a player kick the ball 60 yards down the field, to another player running full speed, I am amazed that the player can even catch the ball – on his foot, of course – let alone crack a shot with any accuracy.

As a player and coach, I have some appreciation for the skill needed to accomplish such a feat – especially since I cannot do it. However, other “fans” are screaming and yelling at the player because – in that scenario – his shot went wide of the goal. Are you kidding me?!? It is amazing that any of that just happened, but to expect perfection… unrealistic.

This same expectation of perfection has made its way down into youth sports. The fanatical parent who is screaming at his/her child to run faster, to play harder, to do better. Again, though they would most certainly deny this, the expectation is perfection and anything less means that you did not try hard enough.

What Does Criticism Create?

Of course criticism is not restricted to sports. How many times have you watched a movie, viewed art, or listened to a musical performance and thought, “Meh… I don’t think they did it right.”

While that may be a valid point – we can all have our opinions, after all – I am struck with what seems to be our inability to separate our own identity from these outside events. Disappointed patrons leave movie theaters angry. Sport fanatics riot when their team loses. Critics blast artists who’s work, “Just didn’t do anything for me.”

Why do we place so much emphasis on things we have no control over? Why do we become so enveloped in these situations that we allow them to change how we act and respond to those in our real world? What does the New York Yankees’ record have to do with your life, right now, right here?

Criticism – especially nonconstructive criticism – does not result in anything positive. What is the point in becoming so emotionally tied to an outcome or result, that it affects relationships that really matter?

In 2010 and 2011, two studies were published identifying significant increases (up to a 30% increase in some areas) in domestic violence following sporting events. (Read the Huffington Post column summarizing the research here). Again, relationships that matter are damaged over events and circumstances we have no control over.

So how do we separate being a fan from being a critic? How can we have passion and love our team/sport/artist/performer without becoming so invested that we damage other areas of our lives?

The answer lies in the motivation behind your fandom. Some fans become more critical because they, themselves, were athletes, artists, or performers but were unable to reach the highest level. As such, at least part of their underlying critical tendencies stem from disappointment, jealousy, or even anger.

Other fans become critical because they have attributed part of their identity to a particular team or artist. How many times have you seen someone with a team’s logo tattooed on his/her arm (or face, in the event of a person I saw yesterday)? These fans’ identities are tied to their team, so when the team looks bad, the fans look bad. And some fans’ egos just cannot handle that.

Other fans – especially parents watching their young children in youth sports – become critical for other reasons. Perhaps they were unable to participate in such events when they were a child, but feel as though their lives would have somehow turned out different had they had the opportunity.

Some parents – like the tattooed fans mentioned above – feel as though their child’s performance is tied to their identity as the parent. Therefore, when the child performs poorly, the parent looks like he/she has done a poor job.

Still others seem to have an amazing ability to predict the future. They feel as though their eight year old will become the next sport or performance icon. Sure she still has to survive middle school, but hey, her performance with this U9 soccer team sets the stage for everything yet to come.

For those who find themselves as more of a critic than a fan, perhaps it is important to step back and become a little more critical of yourself. What ties you so strongly to this team/performer? How does their performance reflect on you? And – most importantly – do you really want that to continue?

Wouldn’t it be nice if you could go back to just enjoying the performance? Admiring these amazing athletes and talented performers as they push boundaries you or I will never approach. Sure I can kick the ball around, but to do half of what those players do on the field would be almost unimaginable.

The purpose of sport and art is to elicit awe and emotion from us. But we determine how those emotions affect us. What is wrong with sitting back and saying, “Sure, the outcome may not be what we wanted, but wow, what a show!”

© 2017. The Mental Breakdown. All rights reserved.